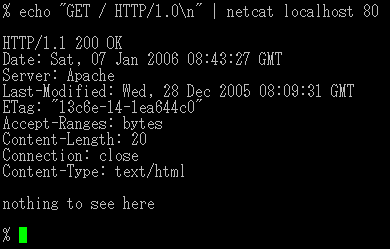 Netcat is a featured networking utility which reads and writes data across network connections, using the TCP/IP protocol.
It is designed to be a reliable "back-end" tool that can be used directly or easily driven by other programs and scripts. At the same time, it is a feature-rich network debugging and exploration tool, since it can create almost any kind of connection you would need and has several interesting built-in capabilities.

It provides access to the following main features:
The GNU Netcat is distributed freely under the GNU General Public License (GPL).