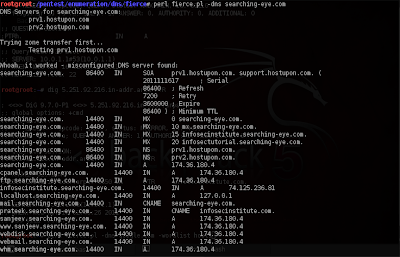 Fierce is a DNS Enumeration and Fierce is a semi-lightweight scanner that helps locate non-contiguous IP space and hostnames against specified domains. It's really meant as a pre-cursor to nmap, unicornscan, nessus, nikto, etc, since all of those require that you already know what IP space you are looking for. This does not perform exploitation and does not scan the whole internet indiscriminately. It is meant specifically to locate likely targets both inside and outside a corporate network. Because it uses DNS primarily you will often find mis-configured networks that leak internal address space. That's especially useful in targeted malware.

Fierce domain scan was born out of personal frustration after performing a web application security audit. It is traditionally very difficult to discover large swaths of a corporate network that is non-contiguous. It's terribly easy to run a scanner against an IP range, but if the IP ranges are nowhere near one another you can miss huge chunks of networks.
First what Fierce is not. Fierce is not an IP scanner, it is not a DDoS tool, it is not designed to scan the whole internet or perform any un-targeted attacks. It is meant specifically to locate likely targets both inside and outside a corporate network. Only those targets are listed (unless the -nopattern switch is used). No exploitation is performed (unless you do something intentionally malicious with the -connect switch). Fierce is a reconnaissance tool. Fierce is a PERL script that quickly scans domains (usually in just a few minutes, assuming no network lag) using several tactics.
First it queries your DNS for the DNS servers of the target. It then switches to using the target's DNS server (you can use a different one if you want using the -dnsserver switch but this can cause problems if the server you use won't tell you information about other people's sites and of course you won't find much relevant internal address space). Fierce then attempts to dump the SOA records for the domain in the very slim hope that the DNS server that your target uses may be misconfigured. Once that fails (because it almost always will) it attempts to "guess" names that are common amongst a lot of different companies. Don't ask me where I got the list, it's just a list of names that id and I have seen all over the place. I thought about adding a dictionary to this, but I think that would take a lot longer, and given that very few of the words are dictionary words I don't think this would add a lot of value.