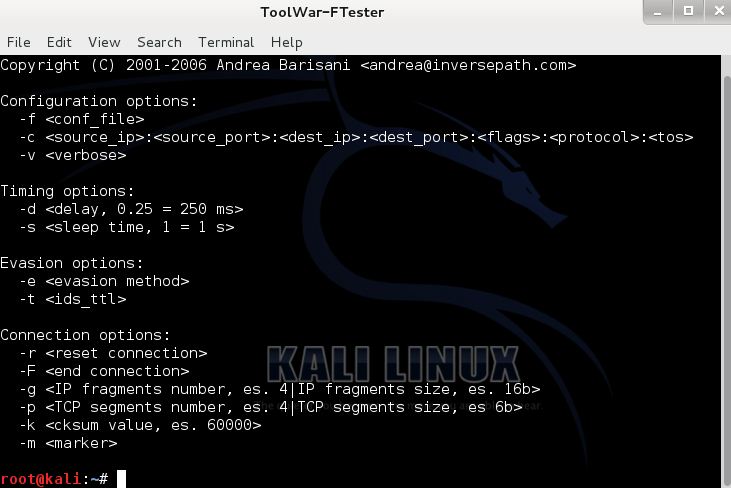 The Firewall Tester (FTester) is a tool designed for testing firewall filtering policies and Intrusion Detection System (IDS) capabilities.
The tool consists of two perl scripts, a packet injector (ftest) and a listening sniffer (ftestd). The first script injects custom packets, defined in ftest.conf, with a signature in the data part while the sniffer listens for such marked packets. The scripts both write a log file which is in the same form for both scripts. A comparison of the two produced log files (ftest.log and ftestd.log) outlines the packets that were unable to reach the sniffer due to filtering rules if these two scripts are ran on hosts placed on two different sides of a firewall. Stateful inspection firewalls are handled with the 'connection spoofing' option. A script called freport is also available to automatically parse the log files.
Using the tool is not a completely automated process, ftest.conf must be crafted for every different situation. Examples and rules are included in the attached configuration file.
The IDS (Intrusion Detection System) testing feature can be used either with ftest only or with the additional support of ftestd for handling stateful inspection IDS, ftest can also use common IDS evasion techniques. The script can also process snort rule definition files.

NOTE: this tool is now outdated and is presented here for historical reasons, a complete rewrite with new features and IPv6 support is scheduled for sometime in the future.

FTester components are PERL scripts. They can be executed on any platform with a recent version of PERL. Three perl modules -Ý Net::RawIP, Net::PcapUtils, and NetPacket ñ are also required. These can be downloaded at the Comprehensive Perl Archive Network (CPAN), and you can install them using the CPAN shell.
Installation is quite simple. Untar the latest archive. Everything you need will be decompressed along with an example configuration file, documentation and a script called freport for comparing ftest and ftestd log files. Before using the package I recommend to read and fully understand all documentation.
ManPage :: Click Here
Documentation :: Click Here
Published Paper :: Click Here