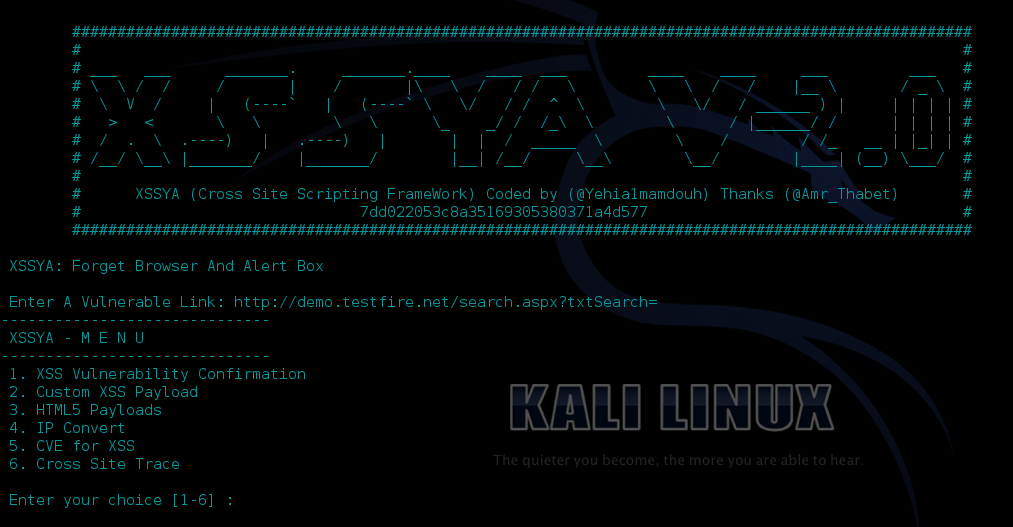 XSSYA (Cross Site Scripting Scanner & Vulnerability Confirmation) written in python scripting language confirm the XSS Vulnerability in two method first work by execute the payload encoded to bypass Web Application Firewall which is the first method  request and response if it respond 200 it turn to Method 2 which search that payload decoded in web page HTML code if it confirmed get the last step which is execute document.cookie to get the cookie.

(XSSYA v 2.0 has more payloads; library contains 41 payloads to enhance detection level XSS scanner is now removed from XSSYA to reduce false positive. URLs to be tested used to not allow any character at the end of the URL except (/ - = -?) but now this limitation has been removed.


Custom Payload 1 – You have the ability to Choose your Custom Payload Ex: and you can encode your custom payload with different types of encodings like (B64 – HEX – URL_Encode –- HEX with Semi Columns). (HTML Entities à Single & Double Quote only - brackets – And – or Encode all payload with HTML Entities) This feature will support also XSS vulnerability confirmation method which is you choose you custom payload and custom Encoding execute if response 200 check for same payload decoded in HTM code page.

HTML5 Payloads XSYSA V2.0 contains a library of 44 HTLM5 payloads XSSYA have a Library for the most vulnerable application with XSS – Cross site scripting and this library counting (Apache – WordPress – PHPmy Admin) If you choose application it give the CVE Number version of Apache which is affected and the link for CVE for more details so it will be easy to search for certain version that is affected with XSS.

XSSYA has the feature to convert the IP address of the attacker to (Hex, Dword, Octal) to bypass any security mechanism or IPS that will be exist on the target Domain. XSSYA check is the target is Vulnerable to XST (Cross Site Trace) which it sends custom Trace Request and check if the target domain is Vulnerable the request will be like this: