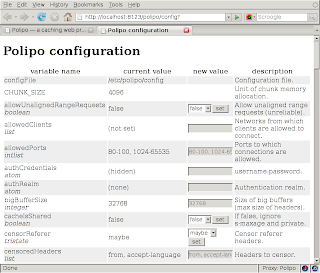 Polipo is a small and fast caching web proxy (a web cache, an HTTP proxy, a proxy server). While Polipo was designed to be used by one person or a small group of people, there is nothing that prevents it from being used by a larger group.
Polipo has some features that are, as far as I know, unique among currently available proxies:
In short, Polipo uses a plethora of techniques to make web browsing (seem) faster.