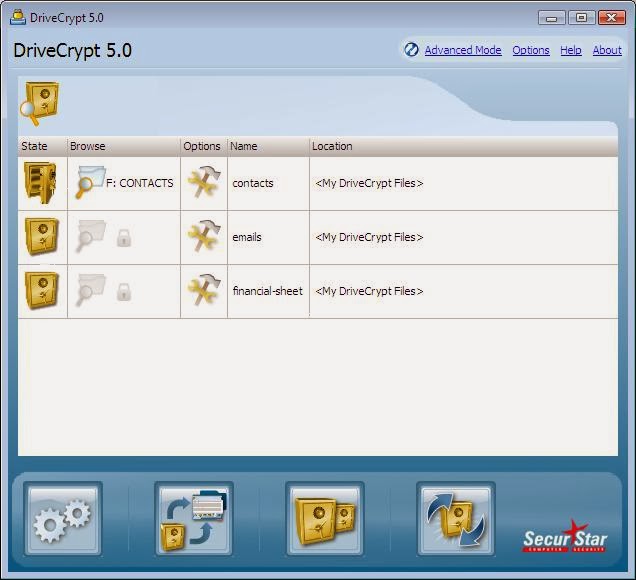 DRIVECRYPT securely and easily protects all proprietary data on notebooks and desktop computers 100% of the time without users having to think about security. Any organization, from a small company to a large international firm with thousands of users in the field, can effectively protect business plans, client lists, product specifications, confidential corporate memos, stock information, and much more with this disk encryption product.

DRIVECRYPT protects your data with very fast and a true "on the fly" disk encryption process. Other products that claim to be "on the fly" decrypt an entire file and load it into memory, creating significant security risks. DriveCrypt file encryption software is smarter and more secure because it decrypts only the specific portion of a file that is in use. Unprotected data never resides on a DriveCrypt encrypted hard drive.


DRIVECRYPT allows both, the encryption of an entire Hard Disk partition, as well as the creation of a virtual container file that will store all the encrypted information.

5. Invisible Containers :: (DriveCrypt standard edition only)
The DriveCrypt Standard edition has the ability to create an INVISIBLE disk INSIDE a container or partition. This way you define two passwords for a container. The invisible disks password gives you access to your working disk, which is hidden in the unused area of your "outer" disk, while another password gives you access to the pre-setup DriveCrypt volume in which you only store data that you would want others to believe is the only data in the container or partition. This is very useful in cases where an aggressor may force you to reveal the DriveCrypt disk's password: By revealing the password of the first or "outer" disk, the aggressor will ONLY see the "prepared data": IE data you put in there, before creating the hidden disk, while he will not be able to see or get evidence that there is another invisible container that securely stores confidential data on the disk.

6. Hide data into music files ::
Using special so called "Steganographic" functionalities, DRIVECRYPT allows you to hide all your sensitive information into music files. Just authorized users will be able to access secret information, anyone else will only find harmless music on the computer…

7. Easily encrypts Pen-Drives and USB disks on a container or partition level. ::


With the HOT Disk option, DriveCrypt can also optionally automatically request the users authentication data as soon as the USB device is inserted. When the USB disk is removed from the computer, all the data are automatically inaccessible to unauthorized persons.


DRIVECRYPT integrates special functionalities that prevent passwords from being sniffed by Hackers or Trojan horses such as Back Orifice, SubSeven etc...

DRIVECRYPT makes Dictionary or Brute Force attacks against encrypted volumes much harder than any of the actual competitor products by dramatically slowing down these processes.

13. Easy and fast hotkey control ::
DRIVECRYPT allows the most used commands like mount or dismount encrypted volumes… to be rapidly accessed trough Hotkeys and/or the toolbar.


DRIVECRYPT allows administrators using the master password, to access an encrypted disk even if the user has forgotten his user password. This ensures that a company can restore a user password if forgotten. DriveCrypt prevents loss of valuable data from user's workstations and notebooks by allowing three methods of encrypted data access: the Master Password, the user password (keyfile) and/or hardware device access such as optional fingerprint-/Smartcard Readers or USB Token devices.

16. Eliminate the Danger Of Unattended Computers ::


DRIVECRYPT provides an automatic and/or manual lock-out feature that locks out the user's console and displays a password-protected screen saver. This lock-out functionality can be activated manually or automatically after a specified period of computer inactivity. The computer remains secure even when left unattended. To restore the screen and unlock the keyboard, the password for the current user or Master Password must be entered.

17. Secure Disk Deletion (Disk Wiping) ::
DRIVECRYPT allows you to wipe the free space on a disk. This ensures that deleted files will never be recovered by special disk tools.


An Encrypted Volume may, with time, become too small or too big, for the amount of data it has to contain. Therefore, DriveCrypt offers you a Volume-Resize functionality. This will allow you to easily adapt a volume to your needs at any time, and optimise the Hard Disk space.


DRIVECRYPT works on any kind of Hard Disk, and removable medium such as Floppy-, Zip-, Jazz-, Sygate-, CD-Rom, DVD- Drives etc… and manages up to 16 TERABITE of encrypted data (Standard edition) or 4 GB (Home Edition)


The installation is easy and fast. During installation, the administrator simply selects the drives to be encrypted, the encryption method he would like to use and the master password. DRIVECRYPT will then make the rest and crypt the selected disks.


If a user leaves the organization, the encrypted data on the PC is easily recovered and restored to a decrypted state by the administrator using the Master Password or the Local Administrator Password.


DriveCrypt does NOT include any backdoor. Encrypted data are only accessible by the legitimate users. Neither the vendor nor any other entities are able to break DriveCrypt disk encryption.